I needed to remotely debug my colonize WASM bundle, as it just showed a blank screen on my iPhone.

Instead, I removed all the packages, and installed them all from source.

The instructions above were found in this helpful GitHub issue.

After installing the packages, I unplugged and replugged my iPhone to my desktop, and selected Trust on the prompt on the device. I then verified that my desktop could see the device by running:

However, attempting to run ios-webkit-debug-proxy gave me a segfault:

Looks like I got the same error described here. I could find a way around the segfault, so instead I used remotedebug-ios-webkit-adapter-docker docker container to run the service.

I launched the docker container, so that it would service remote targets on port 9000:

Then, I opened up Chromium and went to chrome://inspect, where I ensured that "Discover network targets" was selected. I clicked "Configure..." and added localhost:9000 as an IP/port pair to the list. My target adapter still didn't appear at this point. Selecting "Enable port forwarding" did the trick through, and "Target (RemoteDebug iOS Webkit Adapter)" showed up in the "Remote Target" section.

However, selecting "trace" for that target didn't seem to do anything. I assumed that the problem was due to the container being out of date, so I cloned the repo of the dockerfile and rebuilt the container myself. Here's the Dockerfile.

After running this container and opening Safari on my device, I was finally able to see the pages I had open for remote debugging under the "Target" list. 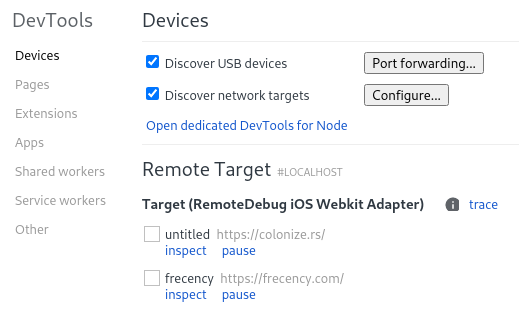